Two surreal clown take turns on the stage in a screaming show where they impersonate eccentric actors, odd bankers, and loony mime artists. 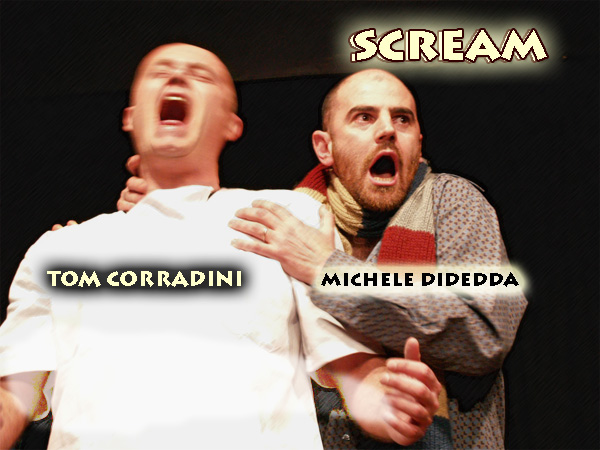 Michele Di Dedda, on stage, Miky
Born a long time ago on 19 April 1973 in the splendid city of Torino. Among platform shoes, bell bottom trousers and Prinz, little Miky lives the typical mindless and joyful life of a little neighbourhood boy,  unaware of what is growing within him.
But in the 90s  Michele Di Dedda, turned into a teenager, taken by schizophrenia fits, begins to bang and hit anything under his sight: pans, shelves, glasses, etc…..!
In this way, besides from studying percussions, he joins the street percussion group DADADANG.

Their show wins a lot of success and performs on the stages and streets of the whole of Europe.
In 2005 begins the ever growing “appetite” towards action theatre.
In  2006 thanks to the encounter with Maestro Philip Radice, Michele gets to know the fantastic world of  Jacques Lecoq. By studying moving theatre, juggling and clownerie  “Miky” is finally born, an eccentric character who stars in an explosive and amusing show.