Madness is like gravity… all it takes is a little push 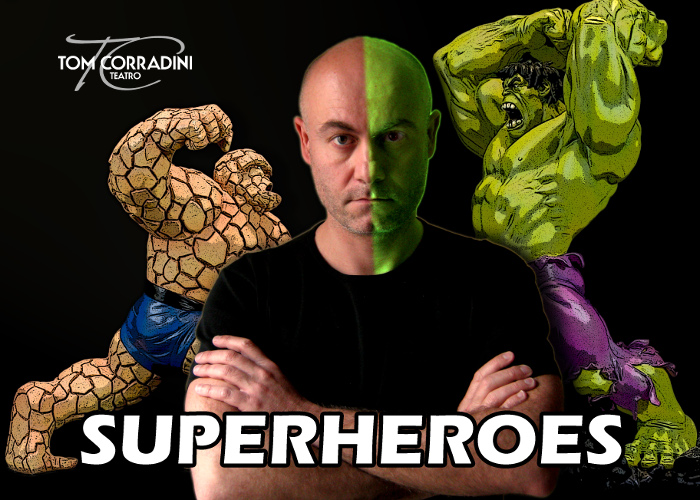 THE LINK BETWEEN CHILDHOOD TRAUMA, MENTAL-ILLNESS AND ADULT LOVE-LIFE told by means of a comic analysis of superheroes’ lives.

Superheroes are beings with super-human powers, seemingly invincible. However, they seem to need LOVE more than any of us. Although bullets and cosmic rays cannot hurt them, they are often very vulnerable before the heart of woman (and why not… even of a man).

Often they live impossible, unfulfilling and tormented love stories which sometimes turn into toxic relationships with people who ignore their real identity or stimulate the superheroes’ dark side. This is because almost each and every superhero had an unhappy childhood, a scar that shaped their personality in one way or the other and, more important, has made them particularly sensitive to a specific type of partner.

Alex Bilodeau – A very energetic show, fabulous performance. It does revolve around specific pop culture, but if the description appeals to you the show will not disappoint. Definite ****!

Press reviews
Threeweeks – Tom Corradini presents a funny and intelligent overview of what really moves our heroes, while managing to get the audience on stage to assist him.

Scotsman – Italian performer Tom Corradini has come up with a odd piece of work here, although it has much going for it. There’s plenty of interest going on here and Corradini is an engaging performer.

Joyzine.org -One of the most unorthodox and challenging shows in a festival that prides itself on these qualities. Tom himself is fascinating to watch – commanding the entire room with a performance bordering on schizophrenic.

Broadway Baby – A positive whirlwind of energy, he leaps and capers around the stage, sustaining a two hundred per cent, full-throttle, sweat exploding performance. He engages his small audiences with a fun, bold flirtatiousness rarely seen on this side of the Channel.